To surf on the Internet at home is becoming painful recently. I have to say, I has been driven mad for all the strange behaviors in the great censorship plan. When I click on some of the result website in Google, it is not uncommon that I get the “The Page Cannot be Displayed” error. 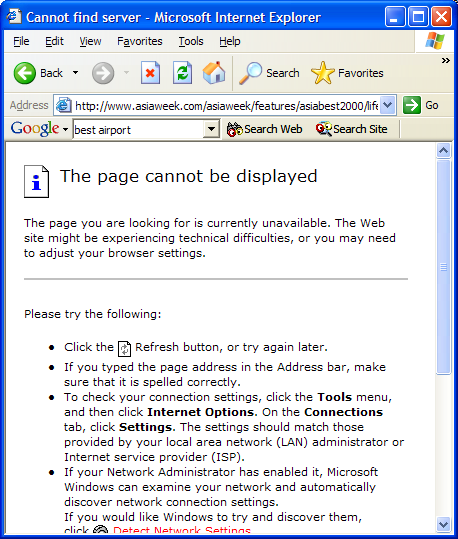 Bugs in the Great Firewall

I believe there must be some bugs in the Great Firewall. If you think I am talking about the holes on the firewall that allow users within the firewall to access banned site, you will be disappointed. It seems the bugs in the software of the firewall have put a lot of “good site” into the blocklist. Disclaimer: I have no proof to say so, just guess from the behavior of my browser.

The behavior of the Great Firewall was still predictable at the time when Google was banned. At that time, whenever I see a site unaccessible, I can think of a reason for it. For example:

Google was banned, since it returned “unhealthy content” – according to the media.

Blog*Spot was banned, since it provide much noise from individuals.

BBC.com.uk and TIMES.com was banned, since it provide “negative” report to the government

MIT.edu was banned, because ………

(Google ban was unlifted, and Blog*Spot was reported not be banned by the firewall. Instead, there is some technical difficulties)

After some time, people just take it for granted that these sites do not exists in the world at all.

The current version of the firewall seems mad. Many website were unaccessible and I cannot find a reason for it. Why is the homepage of an airport considered “unsuitable” for readers in the country? I cannot understand.

Friends of mine also complain that many website cannot be accessed. “The Page cannot be displayed” page in IE is frequently visited page. There are two possible reasons:

1) The China Telecom is experiencing technical difficulties. I am using ADSL provided by China Telecom. I hope it is the reason, but it seems unlikely. Sometimes, the home page of a website can be accessed, and most of the pages are OK, just certain pages cannot be accessed. It seems there is a great agrithms behind big Internet and determine certain pages of a site are different than others on the site and should be treated differently.

So the second reason may be

2) There are bugs in the Great Firewall. Since the software has been widely implemented to all the ISPs, they must have a method to judge which site should be blocked and which will not. It must not be on a block list basis since the increasing number of “unhealthy” content will grow faster than the grow of block list. So it may be content based or keyword based.

If there is anything wrong with a single point in the software, it will affects a lot of website, just like a little change in the crawler will result in the great changes to millions of website on ts result page.

This may be the current sitation.

9 thoughts on “Bugs in the Great Firewall”