This morning, my wife received a phone call from her friend that Microsoft Chairman Bill Gates was murdered in Los Angeles.

What? The whole world goes crazy!

Her friend continued to tell the bad news. She was on a taxi and the radio repeatedly reported the news – “Microsoft Chairman Bill Gates was murdered in Los Angeles when he was attending a charity ceremony“. The reporter used very sorrow voice and interrupted the regular news. The news came from China International Radio Station, he reported.

I was completely shocked, as much as I heard the news of Sept 11 one and a half years ago. I went to Sina.com.cn, the largest and most popular website in China, and they had put it in red font on the home page: ““Bill Gates Murdered in Los Angeles“. The same piece of news appeared on Sohu.com and Yahoo! China too. Here are some screen shot of the news. 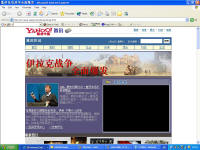 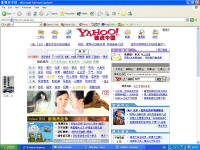 The words spread quickly. I got 3 phone calls and 4 MSN Messenger queries in just half hour (from 11:30 to 12:00). People are spreading the news as quick as they did when the first plane hit the NYWTC. Thanks to the morden technilogy – via SMS, mobile, and MSN Messenger. You know what, the first reaction for a lot of my friends is, forward the news to his/her friends.

On the web, it causes stronger reaction – 190 comments were posted on Sina.com.cn under the news entry.

On the contrary, CNN.com, MSNBC, Yahoo! are just as usual – the news cannot be found there.

After about one hour, the rumor ended. Sohu released an announcement that the

news is fake. Sina did the same 1.5 hours later. This event raises everyone’s attention to the media in China again – who is responsible for this? 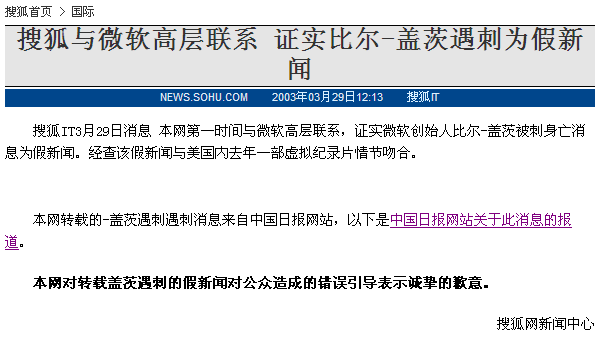 Big names in this game

Big names in the traditional media industry in China is involved in this game. Besides Sina and Sohu, the following agencies also reported the news:

CCTV 4 (according to posts in BBS)

China International Radio (according to my friends who heard it)

Oriental TV (according to BBS)

What people are saying at hearing the news

There are 190 posts under Sina.com.cn’s entry. They reflect the real reaction of people when hearing the news. I digits some of them. They are all posted within 1 hour after the news is release.

All the media pointed out that China Daily is the source of the fake news. According to an announcement later, China Daily said:

America news website CNN (CNN.com) reported on March 28, 2003 (Morning of March 29, 2003 Beijing time), that “Bill Gates was murdered in LA”. The news appeared on CNN’s web site for about half an hour before it was removed. Till now, other news media and agencies didn’t report the news.

After China Daily translated and reported the news, Sina and Sohu quoted the news and spread the news via SMS. At 12:20 AM, March 29, 2003 Beijing time, Microsoft cooperation called China Daily and told us that the news is released in April 1, 2002. It appeared on CNN for unknown reason.

25 thoughts on “Bill Gates Murdered by Media in China”