I just dropped a short email to Christopher, who will be on board of Endeavour Space Shuttle, to say good luck. His journey to the International Space Station on NASA mission STS-127.

The launch will happen at 7:17, June 13 US Eastern time, or 19:17 on the same day in Shanghai – it is good that I can watch the launch at home. I just hope the NASA TV connection on my computer works tomorrow.

Below, Chris is on the right with Canada astronaut Julie on the left: 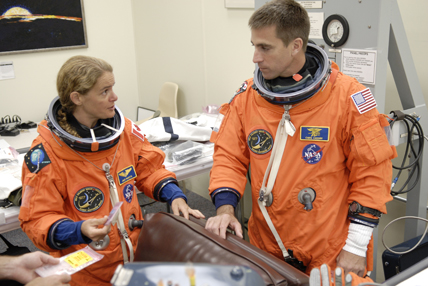 Chris is the only person I know personally in this photo – the second from the left. 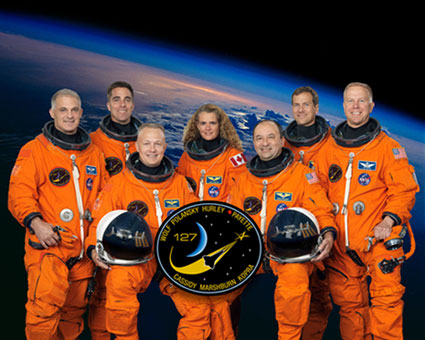 I knew Chris at YLF (Young Leader’s Forum). We first met in the Nanjing meeting in 2007. Actually, he is the first YLFer I saw besides Haisong, who introduced me to the organization. It was one day before we leave for Nanjing. Jan arrived with Chris late to Shanghai, and we went to the small Shanghaiese restaurant at the other side of the Jinjiang Hotel – Lugang Town… The dinner was nice – a curious extroverted me and introverted Chris – I said “My guess is, most astronauts are introverted in personality”. Chris thought (obviously scanning all the peers he had), and agreed. It is not easy to stay in the space shuttle for several months with just few persons, is it? BTW, if the boss of the small restaurant knows who they have hosted that night, she might regret not to bring a camera…

The STS-127 was scheduled to be early this year, but was delayed. I am happy that it seems everything is fine and they are going to have a wonderful launch tomorrow. Many YLFers attended the launch of another astronaut YLFer: Mark Kelly. He has been to the space station many times. I haven’t met him in person, but I heard a lot about the launch among YLFers. The last time, our architect in the team described the launch as sublime. Well. It was the first time I know the meaning of sublime.

Well. Well. Please join me to give Chris and the astronaut team pray for a successful launch tomorrow, and a safe trip to the International Space Station.

P.S. Chris asked me to give him a Chinese name when we were in Tongli at a store with the small coins with a Chinese characters on each of them. I picked the coins very hard, and finally gave the name: 可历星 to him, meaning: Able to experience the stars. Although it is not a strict translation, the wishes are conveyed, that I wish Chris can experience traveling among the stars. Tomorrow is the day for him to realize his dream of getting to the space, and experience the stars!

The launch was postponed due to hydrogen leak. No worries, Chris, and team. You can do it again soon.