Happy Autumn Festival (Mid-moon Festival) everyone! I just had wonderful moon cake with Wendy at home. There are clouds in the sky in Shanghai but the moon is clearly seen behind the cloud.

As the clock just gets near to 24:00 today, the fireworks start everywhere outside my window. It seems the fireworks at the begining of the 5th day of Chinese New Year is more important to people in Shanghai than the New Year’s Eve. By tradition, it is the day to be the day to welcome the God of Fortune to arrive in everyone’s home. I believe the story is: it is to welcome the God of Fortune to *return*, because he has went to the heaven to report about how the family was doing before the New Year’s Eve, and on the 5th day, he return to the family to keep bringing more fortune into the family.

It is exciting to hear the all kinds of fireworks from all the directions of the city. The peak of the celebration starts from around 11:58 PM, according to my clock, and lasts for about 8 minutes. Now, at 0:06, the Ping and Pong are still heard but not that “astonishing”… I remember at the New Year’s Eve, Wendy and I took the risk to get hurt by the fireworks and rushed out to see if our car Goudaner was OK. When we just get out, we saw and smelled the smoke of gunpowder. The visibility was really low that we could hardly see what is going on outside 10 meters. My first impression was: “Even in Bagdad, it may be just as this.” (I don’t mean to be stone-hearted of the pain of people there. It was just what I felt immediately when I was there). 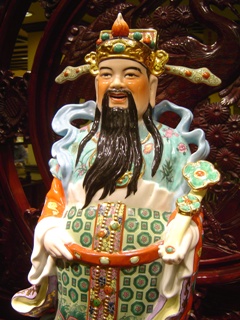 Welcome, the God of Fortuen to my home, to this website (well…) and to the readers’ home.

The Spring Festival of 2005 is coming! I started to see Chun Lian in my client’s office and in the restaurant I visited today. Chun Lian can be translated into New Year’s Couplet. It is one of the most obvious parts of the Spring Festival celebration.

I hope the Chinese tradition continue to come back to families in China. I like it. I am obviously more happen to see the Spring Festival decoration than those for Christmas. I don’t mean to offense Christmas, but for people in China, Chun Lian has much tigher culture connection with people here In the previous years, people seem to celebrate Christmas more seriously than the New Year’s Day (Jan 1).

I like the city of Chengdu very much because the Chinese traditions are preserved much better than other cities. Regarding the folk tradition, it seems to be that it is even better than Beijing. There are even newly built pure traditional houses developed by modern real estate companies. It is very impressive.

The Chinese New Year, Spring Festival, starts from Feb 9 to Feb 15, 2005. There will be a long vacation for people in China. Here is how this works:

That means, in exchange of the continuous holiday, people need to work 9 days continuously from Jan 31 (Mon) to Feb 8 (Tue). This is very similar to the arrangement of the last year. My friend in New York heard people in China have much more holidays than they do in New York. It is not true.

Wendy and I will stay in Shanghai this year. This is the second year we stayed in Shanghai. (2004)

To return home for family reunion is the tradition of China. No matter where you are and no matter how poor you are, you have to appear at the New Year Eve dinner table. This was THE rule for many centuries. Meanwhile, the estimated 1.79 billion person * trip will stress test the railway, airlines, and long distance bus business. To travel at during this time is not a good idea.

There are hot debates on whether the national wide railway should raise their price by about 20%. The “pro-” side says the price is made by the market instead of government. The “anti-” side says it is rubbery to raise the price of something people have no other choices. I haven’t decided which side to support yet.

Stay Instead of Fight

After fighting for a ticket back home and back to Shanghai for 8 years (1996 – 2003), we decided to stay in Shanghai and invite our parents to Shanghai before or during the Spring Festival for reunion. They have more flexibility of travel time. Every time I returned home in Henan Province, I suffered a lot. I had to get up as early as 4:00 AM exactly 7 days before the departure date (when the ticket hit the market) and to line up before the ticket office. It opened at 8:00 AM. Standing in the cold winter for at least 4 hours, a ticket is still not garenteed. I got “sorry” more often than “yes”.

The Most Memorable Trip Back to Luoyang

I still remember the Spring Festival of 2002. I couldn’t get a train ticket anyway and I finally chose to fly to Zhengzhou, the capital of Henan Province and take bus to Luoyang. There are about 1 and a half hour’s bus ride between the cities.

After delaying at the Hong Qiao Airport for 6 hours (Yes. I Expect the Flight Delay), we finally left Shanghai around 6:00 PM of the Lunar New Year Eve. I had no hope to get back home that night. There should be no bus or taxi when we arrived at Zhengzhou Airport around 9:00 PM. With the strong reunion tradition, who will work in the New Year’s Eve? It turned out to be a quite good guess.

Then I thought of the idea to try something special. “How about gathering some people with same destination and hiring a bus (if we were lucky) at Zheng Zhou airport?” I was sure I was not the only person facing the problem. I asked the flight attendant to broadcast on the flight and asked for all passengers who want to transit to Luoyang to come to me. Unexpectedly, about 20 persons signed up quickly. I asked everyone to hand in 50 RMB and contacted a bus driver in Zhengzhou and offered 1000 RMB for the trip – it is much higher than their normal price. BTW, I got the driver’s phone by calling my friends in Shanghai to Google “Bus Zhengzhou” to get the mobile numbers. Haha. It worked!

The rest of the story was simple – we waited for the bus and took it to Luoyang. I was the person in charge and sent almost everyone to their door. When I arrived my home in Luoyang as the last passenger, my family was welcoming me at the door – it was about 11:30 PM of the New Year’s Eve. Thank God! I finally showed up at the dinner table. To be home for Spring Festival was well worth the trouble.

BTW, the other passengers were so kind that they asked me to keep my part of the bus fee for the organizing work. They said it is much better than spending hundreds of Yuan in a hotel in Zhengzhou, on the New Year’s Eve.

Happy Mid-Festival (Moon Festival) to all my friends and readers! 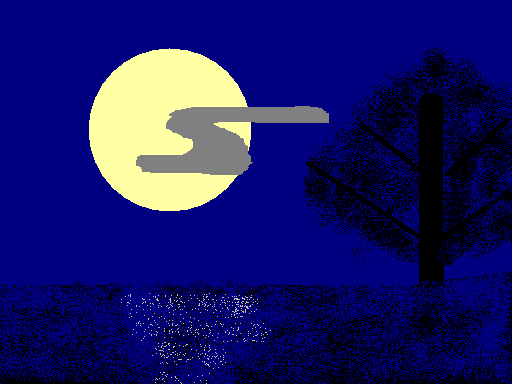 I especally want to send the card to my family in Luoyang, Nanyang, Tongchuan, Fuzhou, Toronto, Portland… It is a season for every member of the family to gather and today, only Wendy and I am in Shanghai.

I just want to update the blog so the world knows I am still alive. :-D I didn’t update my blog in the last two days since there are too many activities in the great Spring Festival. Anyway, I have expected this in my previous entry: Note: Update may not be regular in the Spring Festival (from Jan 22 to Jan 29). :-D Wish you a happy New Year! so I don’t feel too guilty. :-)

On the second day (Jan 23) of the New Year (lunar new year), we visited my good friend’s aunt and Shi Mao Riviera Garden and were very happy to meet his nice family members. We were quite impressed by their old photos of Hong Kong and New Year in the last half century.

On the third day (Jan 24), we hosted my friend couple in my home. They are expecting their bady this Augest. We were very happy to share the good news and saw the great changes after they know of the pregnancy.

On the forth day (Jan 25), I picked up my sister-in-low in Hong Qiao Airport and sent her to the Pudong Airport. There are 55 kms between the two airports. We took taxi there. It costed 157 RMB and less than an hour.

On the fifth day (Jan 26), my good friends visited and we had a wonderful lunch together. The table became a mess with many dishes and wine cups. 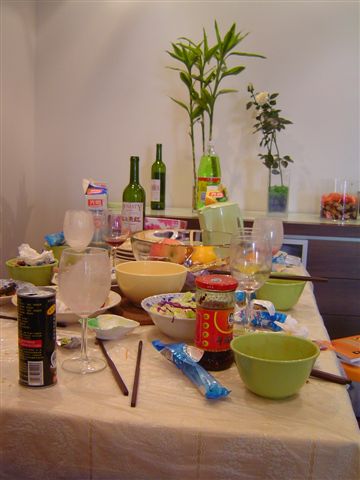 On the sixth day (today), we hosted the family of my high school classmate and visited another friend of Wendy. The visiting or hosting is a great opportunity for us to keep in touch with our good friends and relatives. That is the benefit of the holiday.